It has to be said that southern Spain really is one of my favourite parts of this country.

Largely known as the region of Andalusia, this fascinating area is awash with Moorish architecture, beautiful beaches, historic cities, great food and some awesome flamenco shows!

Many of Spain’s top tourist attractions can be found down here too and, as such, it’s a firm favourite on many other travellers’ lists as well.

But where to go in this glorious region?

Well, here to bring you all the highlights, is my list of the top 7 cities in southern Spain – the spots you really should visit if you’re planning a trip to this amazing part of Europe. 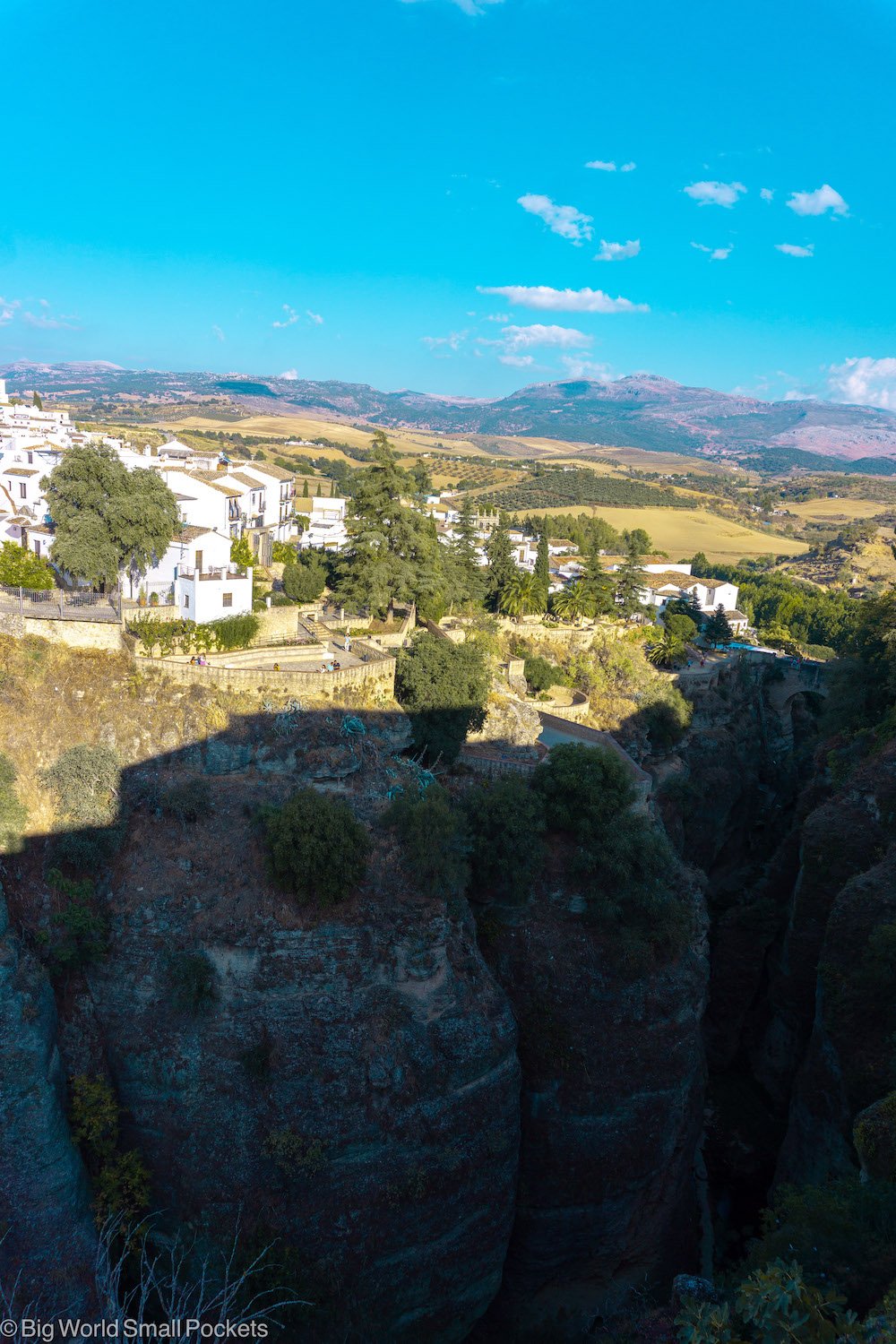 This page contains affiliate links meaning Big World Small Pockets may receive a small commission on any purchases at no extra cost to you. 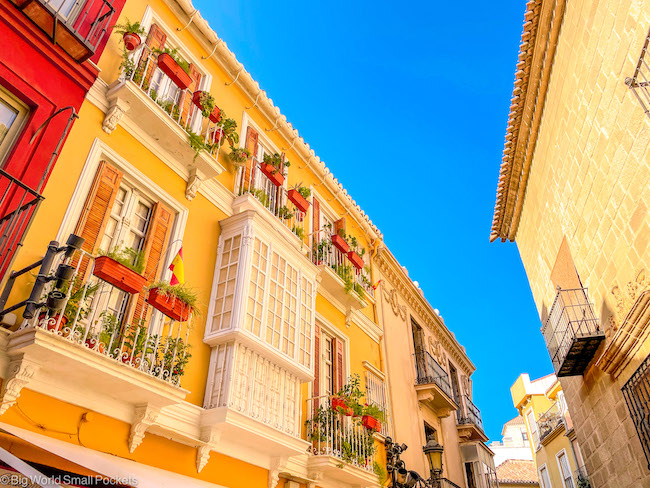 Coming in at number one, it’s the coastal city of Malaga, which is perhaps the biggest surprise on this list.

After all, I really was expecting a Costa Del Sol vibe of lobster-red Brits abroad when I visited Malaga, but instead what I discovered was a delightful historic centre and a vibrant, young city full of culture and fun!

A great entry point to southern Spain – Malaga boasts an international airport, which makes it a great starting point (or end destination) for your adventures in Andalusia.

And while you’re here, don’t miss the historic centre – including the Cathedral, Picasso Museum and the Alcazaba – the beach and the great nightlife this city boasts – check out my list of the 15 things to do in Malaga for more ideas. 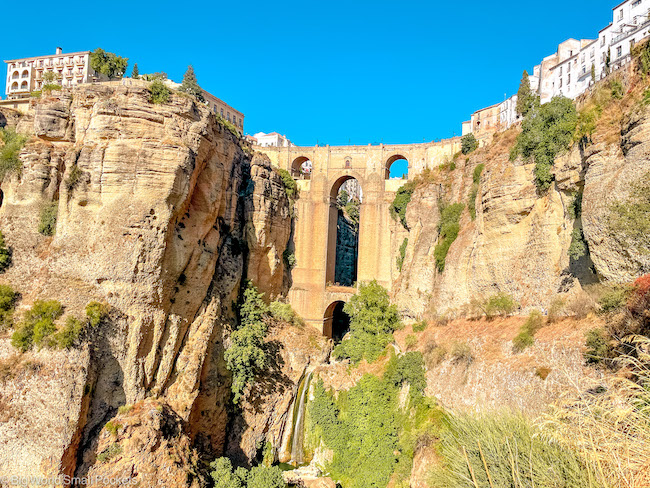 Next up on this list, it’s a small southern Spanish city not far from Malaga.

In fact, many people visit Ronda as a day trip from the coast but, if you want my opinion, this gorgeous spot is worth at least 1 night of your itinerary in its own right.

Not only will that give you the city to yourself once all the day-trippers have left, but it will also allow you a lot more crowd-free time to enjoy Ronda’s top icon!

Yes, most famous for its beautiful Bridge – el Puente Nuevo – which boasts stunning views across the valley below, it’s possible to hike around Ronda’s bridge, which in my opinion really is the best way to see it!

At the end of the hike, you’ll likely finish up on the bridge itself, from where you can absorb the lovely atmosphere of this heritage city, along with its great squares, cobbled streets and Arabic Baths.

Learn more in this post I wrote all about Ronda, which includes lots of info on the best angles to snap the bridge from, the top hiking route to follow there and the key attractions in the town itself. 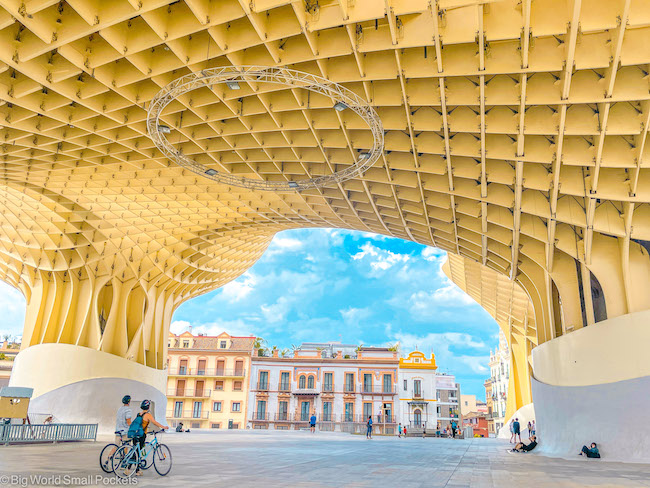 And the third city in southern Spain that you have to visit is Andalusia’s glorious capital – Seville.

A grand and historic city, which boasts an amazing Cathedral and Bell Tower lookout, plus a charming and bustling centre filled with top museums and heritage icons, Seville is certainly worth at least a couple of days of your time.

Thought to be the home of flamenco, Seville is probably the top place to see this traditional Spanish dance in all its glory and to marvel at both the footwork and musicality involved.

Finally, don’t miss the Triana district of this southern Spanish city, as well as the modern architectural wonder that is Las Setas – this is a top spot to people watch and enjoy a view over the city as well.

Learn more in my blog post about the top 19 things to do in Seville you can’t miss.

And in at number 4, another of the best cities in southern Spain is the classic traveller favourite of Granada.

Yes home to the UNESCO-listed beauty that is the Alhambra, this Nasrid Palace boasts amazing architecture, gorgeous gardens and some seriously incredible views over the city and beyond.

Get all the details you need about how to plan your visit to this must-see attraction in my ultimate guide to buying your Alhambra tickets.

While in Granada, I also advise checking out the Sacromonte district (including its amazing cave-dwellings and abbey), as well as many of the elevated lookout spots around the Albaicín district that allow for some top sunset views.

There’s also some great shopping to be had in the whitewashed building-lined streets of this area and, of course, eating your weight in tapas here is also an absolute must – Granada boasts some of the best and cheapest in Spain!

Discover more of the top posts in this city care of my list of the 10 best things to do in Granada. 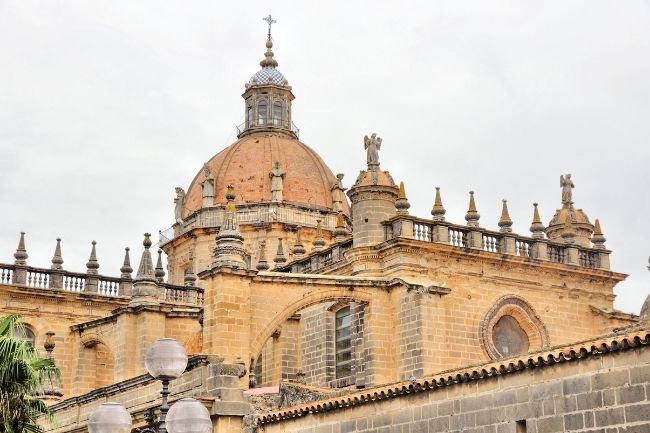 Another ancient gem, the city is still based around the Alcázar de Jerez – another Moorish fortress (yes there’s a lot of them in Andalusia!)  that was founded in the 11th century.

Don’t miss the famous Cathedral and churches here, the Royal Andalusian School of Equestrian Art (check out this great guided tour of a thoroughbred Andalusian horses farm) or the chance to sample one of the city’s main exports – sherry!

You can even visit a winery where the stuff is produced if you’re really keen to do some tastings… And I mean who wouldn’t be?! 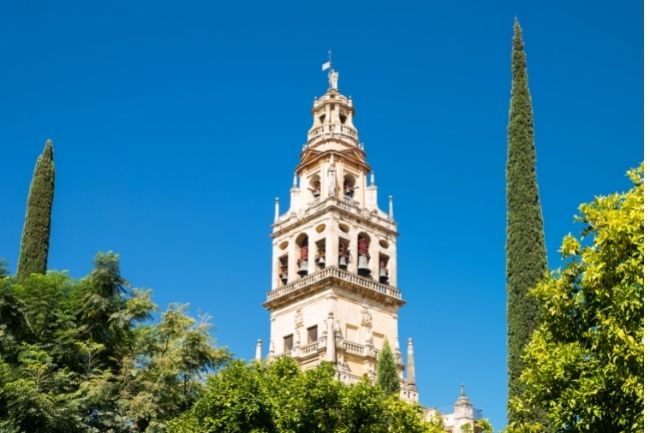 No trip to Andalusia would be complete without a quick stop to visit Córdoba – definitely one of the top cities in southern Spain.

Originally a Roman settlement, Córdoba sits on the banks of the river Guadalquivir (the one that also runs through Seville) and is famous for its Mezquita-Cathedral, which is an absolutely amazing piece of Moorish architecture that’s now UNESCO-listed.

A former Mosque and now Cathedral, this structure belies much of the layered history of the region and is a prominent cultural icon across Spain.

Stunningly beautiful, the minaret was converted to a bell tower when the structure became a Christian place of worship in the 13th century, but there are many features of the Islamic tradition that remain.

I highly recommend taking a guided tour of the Mezquita-Cathedral so that you can really learn about this and a ton of other great info about what you are seeing.

A helpful bonus is that most guided tours include skip-the-line tickets, which is definitely what you need with only a short time in Córdoba to enjoy it! 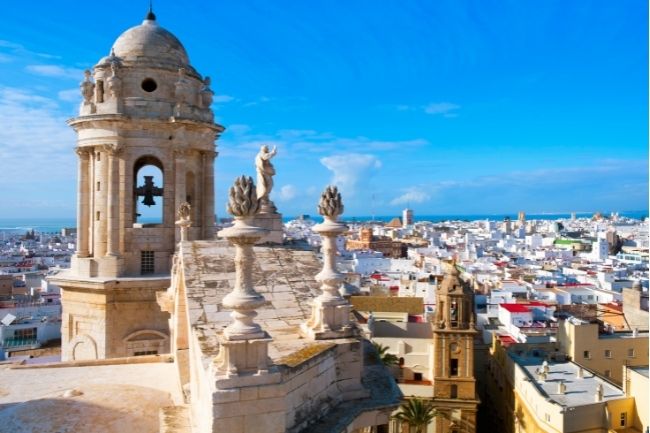 And finally, the last of the cities you have to visit in southern Spain, it’s Cadiz.

Close to Seville, you can day trip to this place if you want, but I really recommend spending a night to fully explore this ancient spot if you can.

Of course, there’s a Cathedral you should visit, along with a number of other castles, towers, squares and museums which all deserve a slice of your time.

In addition, the Roman Theatre is another must-visit attraction, as is the Cadiz market where you can pick up some delicious local products – perfect picnic lunch material!

Finish up your time here with a stroll along the Cadiz seafront to take a dip at La Caleta beach or enjoy a top-rated segway tour that is bound to have you whizzing around the city and smiling in the sunshine.!

Just enter your details below and I'll email it you - simple!

Information will be sent to the email provided above

When to Visit Southern Spain 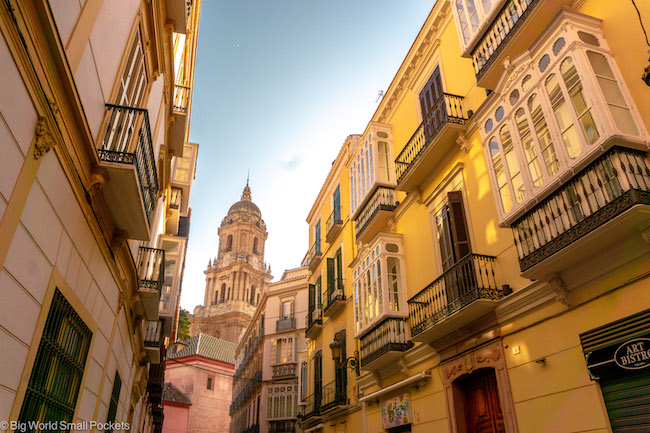 No question in my mind that the best time to visit the cities of southern Spain is either during the spring months of April, May & June or in the autumn months of September and October.

During both these seasons, you’ll experience delightfully warm weather that will allow you to take full advantage of the region’s beauty at its best, without wilting in the summer heat, which regularly sees temperatures in excess of 40 degrees celsius.

Quite simply, sightseeing when it’s this hot is just no fun, so sticking to the months either side of the peak summer really is your best bet.

These so-called “shoulder” months are also likely to be quieter, meaning thinner crowds and better prices – so long as you avoid peak times like Easter or school holidays!

How to Get to Southern Spain

If you’re arriving from elsewhere in Spain or a nearby European country like Portugal, then you can easily reach the southern Spanish cities of Seville or Malaga by bus or train.

When it comes to booking your coach or rail journeys here, I highly recommend Trainline, as they make it easy, quick and simple to compare hundreds of options to southern Spain from across the country and region.

Otherwise, if you’re arriving into southern Spain from further afield, it’s great to know there’s also good international airports in Seville and Malaga too, with regular flights from London, Madrid, Berlin, Paris, Rome and many other destinations.

As always, I suggest using Skyscanner to find the best flight prices as they include budget airlines in their searches. 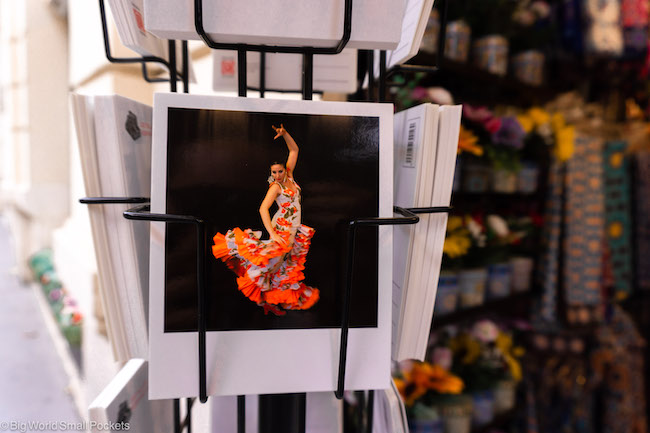 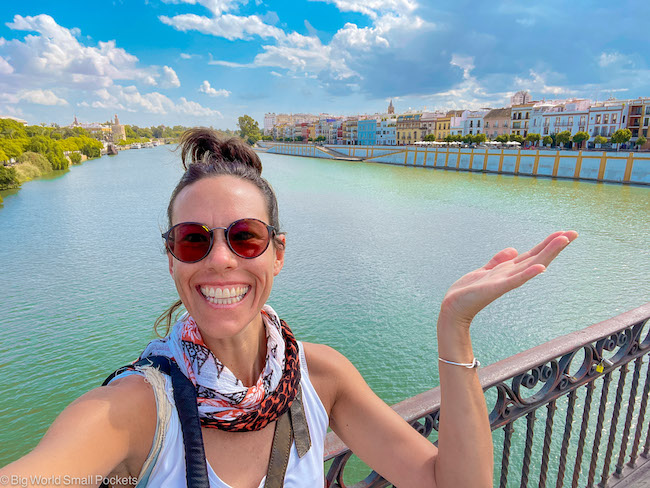 I wouldn’t dream of travelling anywhere these days without proper coverage and always recommend travel insurance from World Nomads which I’ve used during my time across Spain.

World Nomads are actually one of the few companies that will insure you for a huge range of outdoor activities as standard – essential for a region like Andalusia.

These guys will cover you at some seriously great prices!

Where Travel After Southern Spain? 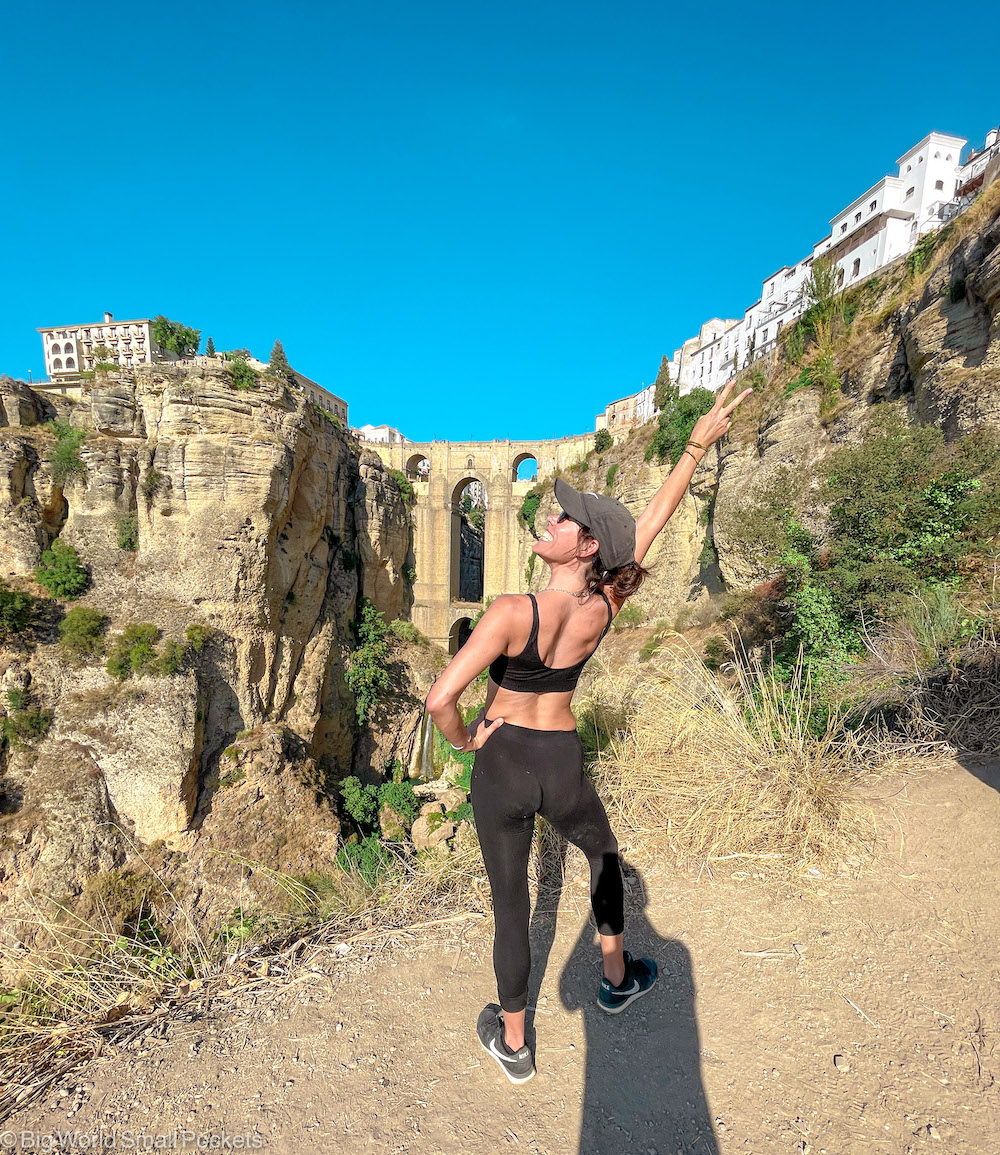 If you still have time for more travelling after Andalusia  (and lucky you if so!), then you may want to head Madrid, Barcelona or Valencia – all top destinations within Spain that can easily be reached by car or train.

Check out these top articles for some inspiration…

So there you have it, my list of the 7 cities in southern Spain you have to visit!

Tell me, which is your fav destination on this list?

Or do you have another top Andalusian city you love?

This site uses Akismet to reduce spam. Learn how your comment data is processed. 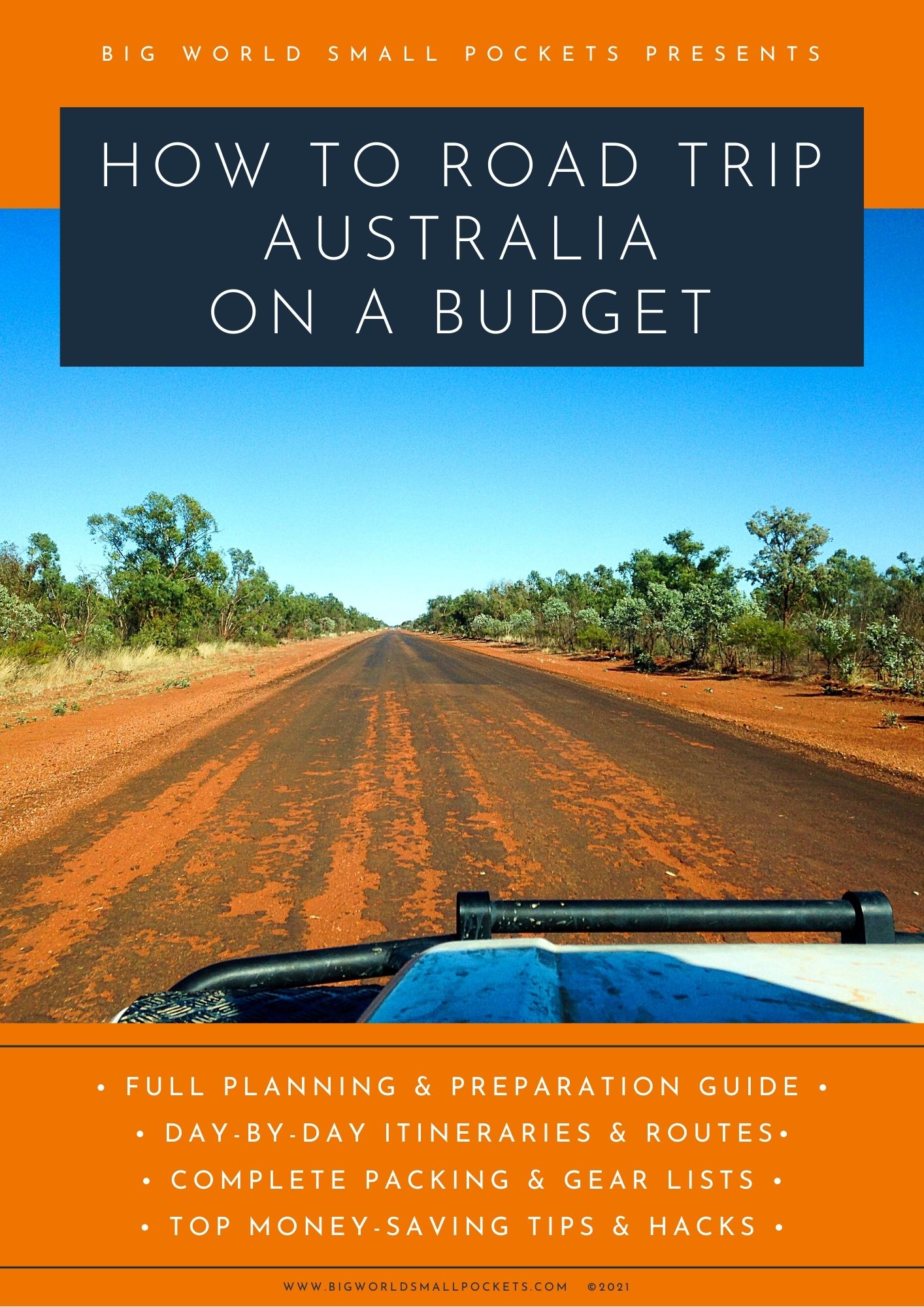